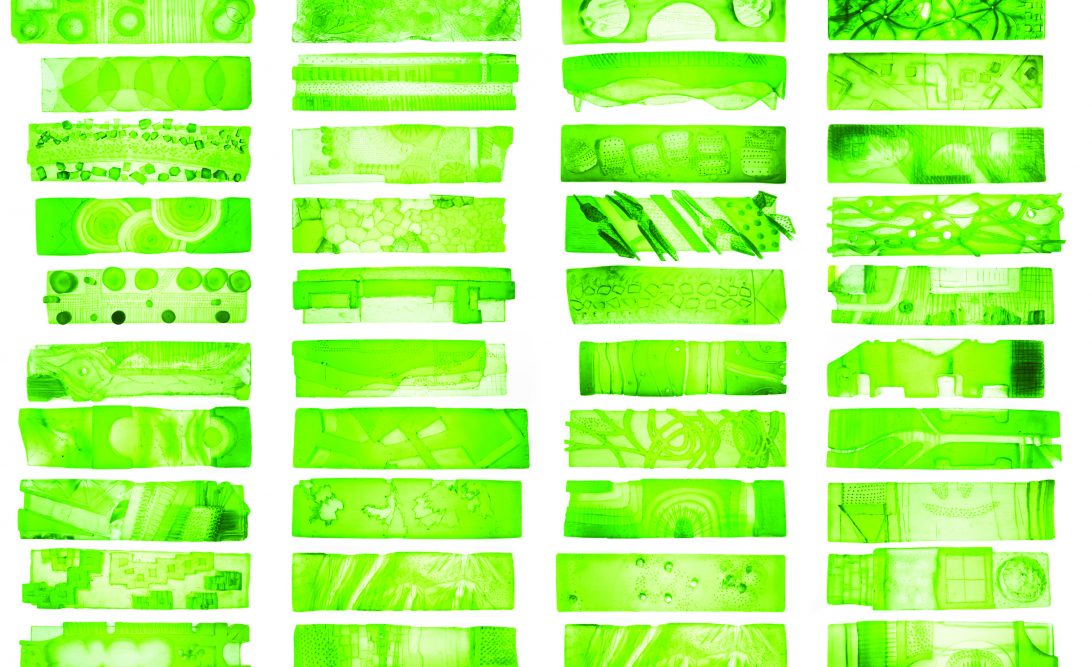 During the Fall 2017 semester a new set of exercises for a design foundation studio was developed by Alberto de Salvatierra, Samantha Solano, and Joshua Vermillion. Inspired by temporal cycles and systems, the UNLV School of Architecture’s Design Foundation course—which must serve the dual constituency of beginning architecture and landscape architecture students—was redesigned and rebuilt around operationalized biological processes of aqueous [MONSTR]s as “site.” Beginning with research into the anatomical, structural, circulatory, and seasonal components of students’ assigned “site,” the De[MONSTR]ative Architectures studio was focused on creating a framework that facilitated reflexive operations between 2D and 3D representational modes of communication. Tasked with dissecting both static and kinetic features in a set of drawings that explicate spatial thresholds and transformative flux, students had to retranslate findings into paper and wooden dowel models before re-rendering them back into 2D drawings. Highlighting the power of repetition, layering, complexity, rhythm and composition, the students’ work acquired a unique dimension tempered by the implicit fixation with time they had to integrate into their explorations.

To begin, each student was randomly assigned a [MONSTR] to be the generative tools behind this project that stretched throughout the semester. Straddling a gradient between the familiar and exotic, the assigned creatures were selected for their unique set of “monstrous” qualities. Beginning with research and observation, the students documented anatomical, biological, circulatory and seasonal components of their given “[MONSTR].” In drawings produced, students were to treat their [MONSTR] as if it were architecture by using rigorous and precise orthographic construction techniques similar to drawing a building. The most successful drawings were those that layered and superimposed multiple views or time frames and focused not necessarily on how the creature looks, but rather how it works, moves, or changes over time.

Next, the students were tasked to expand their research, observations, and drawings by producing a series of draft paper study models, culminating with a final paper construction. By testing and developing a set of operations such as folding, cutting, creasing, scoring, pleating, curving twisting, and others, the objective was to further spatialize the system drawn in the previous step. In other words, to take the same logic from the drawing and make it three-dimensional. The students were reminded that the model was not necessarily about form, but rather using the same processes and logics to create different spatial qualities in different media. The results, made from 2-ply bristol paper, varied in size and complexity. Some were static while others were operable or kinetic. Spatial qualities emerged as volumes were defined by the surfaces of the paper and the interplay between these surfaces and light.

For the third module of the project, the task was to use the same thought processes and logics from the original drawings and paper models to build a scaffold model of wooden dowels that also abstracted the [MONSTR]’s movements, flows, and mechanisms. In other words, repeating the last step but, again, with a different, linear or stick-based medium. The students were reminded that this model was not meant to be an extruded version of their drawing, but rather should attempt to reveal new information and spatial relationships governed through careful use of density, repetition, order, and spacing. And, of course, wood behaves differently than paper, with different strengths and constraints.

The last steps of this project involved more drawing to develop the ideas generated in the first three steps. Each student used traditional orthographic drawing techniques to translate both models (paper and wood) into a set of plan and section drawings (figure 4). While explicitly spatializing the models, these drawings were to employ careful measure, line weights, and poché, as well as to reinforce specific observations and intentions. Concern was given to not only how the models and subsequent drawings looked but how they came to be through the actions performed—drawing in a process of formation.

The second project of the semester (ex[PLAN]ate) asked students to (again) begin with direct observation to document material components of a specific urban landscape through a series of on-site sketches and graphic notations. Students then worked iteratively to translate these in-situ observations through physical modeling and orthographic drawing techniques (figures. Once again, this project engaged both traditional methods of representation as well as modes of abstraction and invention as tools for clearly identifying and communicating observed landscape materials and processes. At the conclusion of this second project, the students had designed two unique landscapes/sites through transformation and abstraction, facilitated by iterative modeling and drawing.

With both [MONSTR] drawings and models, and, site drawings and models, the remaining semester projects dealt with synthesizing the final deliverables from the de[MONSTR]ate and ex[PLAN]ate projects into design proposals for a dwelling that responded to an anthropomorphized program. Students were randomly assigned a human (profession and hobby) which acted as this anthropomorphized program. From these, the students constructed an inhabitant profile by assigning them a gender, age and their familial unit (single, couple or family). Design development occurred in iterative stages between modeling and drawing—with specific emphasis on plan and section drawings.